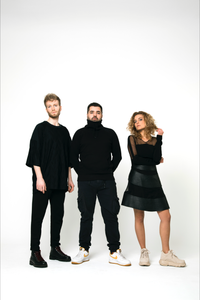 The band ROSEMARINE, consisting of singer Mia Knop Jacobsen (DK), guitarist Igor Osypov (UKR) and drummer Philip Dornbusch (D), was formed in 2018 and they released their debut album in 2019 under the renowned US label "Ropeadope". Since then, their musical identity has continuously developed. The band is now processing their journey in their new album. In a sign of the times, they are increasingly focusing on sound design. Together with the valuable input of their producer Charis Karantzas, they realize their transformation into an equally rousing, yet completely new world of soundscapes. Their new style lives from seemingly unreal vocals, multi-faceted synths, complex grooves, ingenuity, and a great love for detail. ROSEMARINE is bringing the profound stories of their album to the stage and undoubtedly staying true to their honest attitude. Their performance promises a thrilling live experience with songs telling of the highs and lows, nebulous emotions, the real and the surreal.